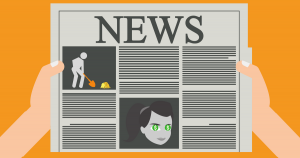 In an ideal world, media outlets would act as a mirror that reflects society back at itself and gives us much-needed opportunities to examine our actions, attitudes and beliefs. A societal “self-crit”, if you will.

In reality, however, the news media often performs that examination itself, giving viewers and readers pre-packaged ideas about topics most of us won’t research past the headlines.

This potentially polarising approach is particularly problematic when it comes to one topic that most news publications and current affairs programs never get tired of covering: Compensation.

When it comes to portraying “compo” claimants, there seems to be no middle ground in Australia: You’re either a blameless victim or a shameless opportunist.

The Australian media, and in turn the Australian public, tends to see some groups of people as blameless victims.

While it’s easy to sympathise with these groups, there can be unintended consequences when media outlets act as advocates:

While some compensation claimants can do no wrong in the eyes of the media, many people who make a claim find themselves in the limelight in all the wrong ways.

Claimants the media portrays as shameless opportunists include:

These interpretations, while sometimes valid, have problems of their own:

In our next blog “Contextualising Compensation: What You Need to Know About Claiming” we fill in the gaps so that whether you’re considering making a claim or you’re just reading about someone else’s case, you’ll be well informed.

Need to know more about compensation law in Queensland? Tell us your story today and we’ll let you know what your options are. Just fill in our online contact form, call (07) 3607 3274 or email info@phoenix-law.com.au and our friendly team will be in touch.